5 Fresh Ways of B2B Networking (outside of coffee breaks)

People attend events to not only learn something new, but also to do some B2B networking to expand their network. Typically this is limited to coffee breaks. Try injecting 5 fresh ideas to break away from the norm in your next event.

Google created a carnival-themed activation in February for dad bloggers and influencers at the Dad 2.0 Summit to spread awareness of its Be Internet Awesome program, which instructs parents, educators and kids about how to be safe and smart online. Dads shot hoops, knocked over bad passwords with beanbags, worked a claw machine and received advice from a Zoltar fortuneteller, all while taking away tips for online safety (MKG, New York City, handled).

“It’s an intimidating topic that we wanted to break down and make it fun to interact with,” says Jessica Covarrubias, education program lead at Google. “Creating an experience disrupts the awkwardness of having to interact with one another. It creates discussion points and opens up the floodgate to positive networking.”

“Delegate experience is key for us, so it is important that we incorporate an element of fun to complement the education and inspiration side of all of it,” says Cara Weers, head of events, global, at Xero. “The activities tapped into the delegates’ shared passions outside of work.” 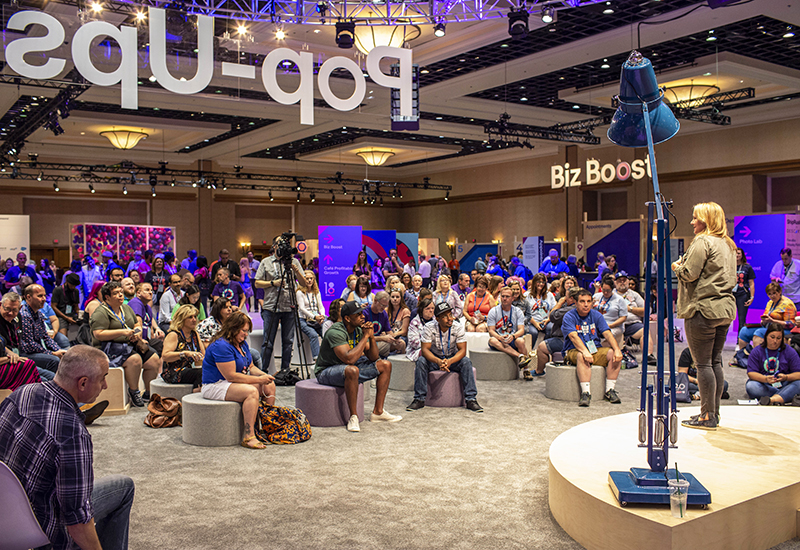 eBay at its seller conference, eBay Open, created an informal space separate from workshop content called the Pop-up Theater where executives and eBay employees discussed topics in a Q&A format, rather than a staged address. That casual style aligned with the brand’s messaging, “Say Hello,” designed to encourage attendees to say “hello,” not only to one another but to new business practices and innovations in payments and shipping (Sparks, Philadelphia, handled).

“We like to think of ourselves as being a partner to our sellers and like to be less formal. It’s really about saying hello to whatever it is at the event that’s happening, whether it’s inspiration, education, networking or fresh ideas,” says Jessie Babiarz, eBay Open executive producer and head of seller events. “It felt friendly, as if you’re welcome to come up and talk to anybody.”

Case in point: eBay’s ceo, Devin Wenig, who was approached by sellers with questions while he was chillin’ on a bean bag chair. Talk about a networking opportunity.

eBay Open attendees are also incredibly diverse, from both a global and a business vertical perspective. For the event last year, eBay created regionally focused networking groups and others based on business verticals. “If you sell in a specific category you could go up to another seller in that area and know they also sell in your category. It’s a conversation starter, which we found helpful,” Babiarz says.

Alt Summit 2018, an event for creative entrepreneurs and social media influencers, held sponsored dinners themed by attendee interests and trades, from parenting to DIY décor to travel. One example was a networking dinner hosted by sponsor Munchkin that brought together new parents, expectant mothers and curious attendees to network and share stories of motherhood and hear from New York Times bestselling author Rachel Hollis. 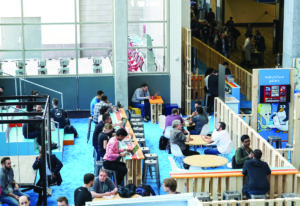 Attendees of DockerCon, the computer program’s annual user conference, come to the event to network and learn from their peers. But this crowd characterizes themselves as introverts, and too shy to initiate conversations. The solution: Integrate Braindates by e180 through the event app.

“It’s a built-in program, so they think they’re not acting unusual if they do something as part of the conference,” says Ashlynn Polini, senior events producer for DockerCon. “It gives them a platform to voice what they’re trying to go there for.”

The program is named Hallway Track, in reference to hallway conversations often had after breakout sessions. Attendees propose topics, express interest in them and suggest times to meet through the app at a designated Hallway Tracks space, which in years past have included a boardroom table with swings for seats or a foam pit. A concierge links up group members and finds a space for them to chat (Jack Morton Worldwide, San Francisco, handled).

Docker’s Hallway Track group meetups typically include two or three people, but some meetups are led by peer leaders, called Docker Captains, which are more like mini-breakouts. Due to their popularity within the community, Captains hosting Hallway Tracks generate more interest from attendees. At these mini-breakouts of 15-20 people, Captains introduce the topic and then hand over the discussion to the group, for either a round-robin or Q&A.

“It’s all about learning from other attendees, whether it’s a specific use case or a point in time or stage of the journey they are on,” Polini says. No cliché coffee talk here.