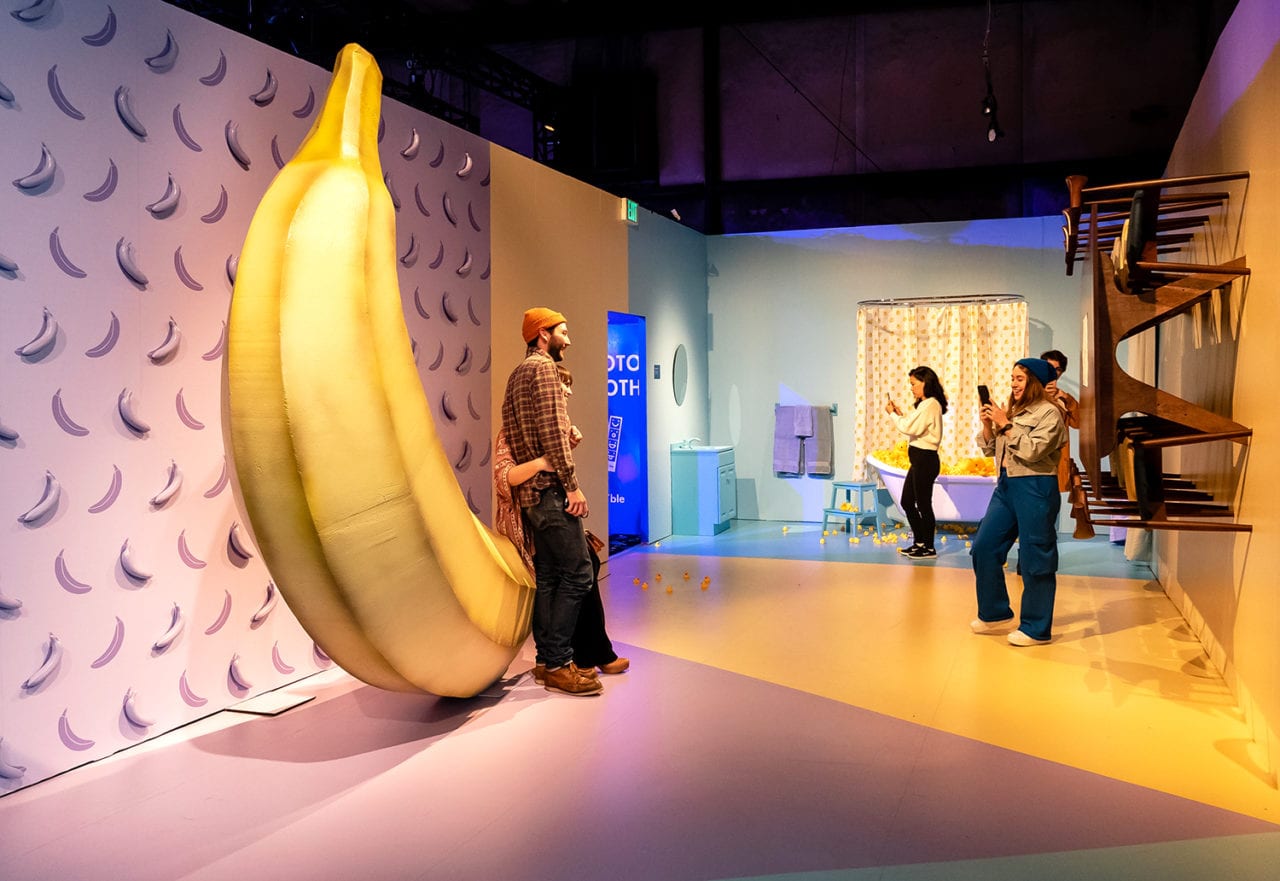 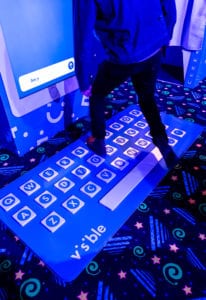 Visitors use their feet to text on a giant keyboard in a reimagined version of Dance Dance Revolution.

For many consumers, a wireless provider is just that—a faceless service that powers their phones. Visible, an all-digital service that utilizes Verizon’s network, is trying to shift that narrative through a combination of community engagement and experiential marketing in an effort to cultivate a more intimate relationship between the brand and its clients, as well as potential customers. Visible’s objective has been supported by pop-up programs in New York City and Austin, and a recent event campaign fueled by an intentional billboard typo. Now, the experiential programming continues with an Insta-worthy pop-up dubbed #Phonetopia, which opened Nov. 7 and wraps Nov. 24 in the brand’s hometown of Denver.

In addition to being headquartered in Denver, Visible selected the city as a test market to reach its target, millennials, who have been moving from coastal towns to the Mile High City in droves. The idea is to figure out which kinds of engagements resonate while the brand is on its home turf, then scale the programming to reach other markets moving forward. #Phonetopia, free and open to the public, is being activated in Denver’s RiNo district, and was timed to align with CRUSH, an annual community celebration of art that transforms the streets, buildings and alleys of RiNo into permanent, open-air galleries.

“Those spaces that are usually left unused are suddenly becoming the center of community activities—which is where we wanted to be as a Denver-based company,” says Minjae Ormes, cmo at Visible.

The #Phonetopia experience is designed to make consumers feel as if they’re literally stepping inside their phone at every turn. In the Notification Gauntlet zone, attendees navigate a ropes obstacle course featuring mirrored walls. In the Push Notifications space, participants literally push away soft, hanging spheres featuring emojis. In the Alerts Jungle, consumers encounter a gymnastic rings course above a ball pit, with each red ball featuring a number, replicating phone notifications. And then there’s a DM slide where they can—you guessed it—slide on down into a pit of foam “Ds” and “Ms.”

The Contentorium celebrates “iconic content that is guaranteed to get you likes” and features a larger-than-life banana installation, a bathroom vignette featuring a tub filled with rubber duckies meant to inspire “duck face” photos, and a full dinner table scene flipped on its side that juts out of a wall. There’s also an SMS Arcade where attendees can interact with old school games like classic claw machines, along with a reimagined version of Dance Dance Revolution called Text Text Conversation, where participants use their feet to text on a giant keyboard. The experience concludes inside a ’60s-era Airplane [Mode] Lounge featuring comfy booths, costumed brand ambassadors manning airplane drink carts and iPads offering more information on Visible’s offerings in a format similar to the safety videos passengers typically view before takeoff.

Also found on-site: The GIF(t) Shop, where #Phonetopia attendees are greeted by looping neon GIFs, can learn more about the brand and its services, and grab some Visible swag. Photos taken throughout the event are also on display on digital Polaroids, mimicking a rollercoaster ride’s finale. At night, the GIF(t) Shop turns into a blue-hued bar for concertgoers.

On select days, consumers can also attend music-inspired yoga classes, dj dance parties and live art sessions. Evening VIP events are part of the mix, as well. And, naturally, there are plenty of Instagrammable moments to capture, like a rainbow arch installation and a donut wall designed to look like angel wings.

Beyond the pop-up activities, the #Phonetopia experience includes a handful of intimate music performances (the pop-up space has a max capacity of about 200 people) meant to represent the concept of streaming music on one’s phone. The featured artists—Maggie Rogers, HAIM, Anderson .Paak, GRiZ, Tierra Whack and Kacey Musgraves—are people who “have nothing to hide and are true to themselves,” helping underscore Visible’s commitment to transparency, according to Ormes.

“As a digital brand, we do not exist in your physical life because the product we’re selling is a phone service that is invisible and we do not have physical stores,” says Ormes. “So we want to make sure that we show up in people’s lives in a way that looks physical and tactile. We’re ultimately trying to get to the point where there is an emotional connection to how you think about our brand.”